If you lived areas of Arizona for a long time, you might know the pain associated with a scorpion sting! So, what do you do if you get stung? How do you even know if you got stung? There are actually several ways that you can identify, and treat, scorpion stings. First of all, how do you know if you’ve been stung by a scorpion? It might be hard to tell a scorpion sting from something else, like a bee sting. There are a few ways in which you can distinguish that you’ve been stung by a scorpion, and not another animal. Some mild signs and symptoms of a scorpion sting include pain, which will most likely be more intense than a bee sting; numbness and tingling in the area around the sting; and slight swelling. If you have a more severe reaction, it will actually be easier to tell that what you have been stung by is a scorpion, because the symptoms are so unique. These severe symptoms include muscle twitching or thrashing; unusual head, eye, and neck movements; drooling; vomiting; severe sweating; high or low blood pressure; accelerated or irregular heartbeat; or restlessness or excitability.  So, once you discover that you do indeed have a scorpion sting, what do you do?

First, wash the area of the sting with soap and water to clean it, and prevent infection.  Then, apply a cool compress over the sting for ten minutes, then remove it, and repeat. If the scorpion sting is on your arm or leg, elevate that limb so that it’s level with your heart, which should help with any swelling. If you believe that the scorpion that stung you might be venomous, it might be a good idea to apply bleach to the sting site. Soak a cotton ball with the bleach, then hold it on the sting for about five minutes, or until the tingling sensation stops. If you apply the bleach quickly enough, it could neutralize any possible venom from the scorpion. Before doing more, if you believe that the scorpion might have been poisonous, go to your nearest doctor or emergency room, or call a poison helpline.

It’s always a good idea to be on the lookout for scorpions if you know that they are in your area. Take measures to protect and fortify your home against scorpions, and be sure that you know what to do in case of a scorpion sting!

Scorpions have a reputation of being more dangerous than many other insects or arachnids, with about 50 species having stings […]

Read the rest of Arizona Scorpion Sting Signs and Treatment 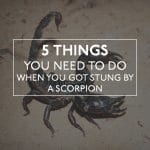 Scorpions belong to the Arachnida class, and they are related to spiders, mites, and ticks. The average size of scorpions […]

Scorpion Stings: Watch Out for these Common Symptoms

Scorpions are common in Arizona. Some of them just deliver nasty stings that are painful and frightening. Others deliver stings […]

Read the rest of Scorpion Stings: Watch Out for these Common Symptoms The poisonous “bark” or “crevice” scorpions are pale and small, making them difficult to see. They are common throughout many […]

If you live in Arizona, then you are sure to have seen a scorpion, and maybe even in your home. […]

Read the rest of Male VS Female Scorpion- Is One More Dangerous?

How dangerous are scorpion stings anyhow?

Read the rest of How dangerous are scorpion stings anyhow?

Don’t Believe Everything You Hear: Myths and Facts about Scorpions

Scorpions are nasty little creatures, and they’re a nuisance. Not many people would dispute those claims. However, because scorpions near […]

Read the rest of Don’t Believe Everything You Hear: Myths and Facts about Scorpions