Living in the desert often comes with the unfortunate arrival of scorpions in our homes. For top rated scorpion control in Phoenix, you can trust the professionals at Varsity Termite & Pest Control. With five star reviews on both Google and Yelp, you can trust our scorpion removal experts to rid your home of these unsightly creatures and give you peace of mind knowing that you won’t come across any surprises. For the best Phoenix scorpion removal, contact the exterminators at Varsity Termite & Pest Control!

Phoenix Scorpion Control by The Varsity Team
Video Transcript:
Looking for expert Phoenix scorpion control? Look no further than the professionals at Varsity Termite and Pest Control. Our highly trained technicians are able to get the job done right. And our customer service is second to none. Our Scorpion Barrier system has been stopping scorpions from entering Arizona homes for years and can protect your home too! Call us today for a Free Scorpion inspection at 602-757-8252 or visit us online at VarsityTermiteAndPestControl.com, today!

To the majority of people, scorpions appear to be pretty creepy creatures. Plenty of people have an innate fear of scorpions, one reason scorpion extermination in Phoenix is so popular. In reality, the only scorpion which produces a lethal sting is the Arizona bark scorpion, but scorpion pest control in Phoenix is contacted for all types of scorpions found in the area. While Phoenix scorpion control is definitely necessary for getting rid of the bark scorpion, it’s still a good idea to keep other scorpion species out of your home as well. Their sting, while not lethal, can be painful, sometimes requiring medical attention.

Besides the fact that they’re generally weird and disconcerting to find in your home, there are some interesting things you may not know about scorpions:

While the majority of scorpions are not dangerous, very old and very young people may be in danger when being bit by any scorpion. It’s because of this that you should contact a qualified Phoenix scorpion control company to help you deal with any scorpion species you might encounter. At Varsity Termite and Pest Control, we specialize in keeping scorpions out of your home in the first place. Contact us at 602-757-8252 to learn more about our Scorpion Barrier system.

For trained scorpion exterminators in Phoenix who can eliminate these creatures from your home, trust Varsity Termite & Pest Control!

Keep the scorpions out of your home with the top rated scorpion pest control experts at Varsity Termite & Pest Control! Say goodbye to those unwanted pests!

When you find scorpions in your home, the scorpion exterminators at Varsity Termite & Pest Control can make sure they are removed from your home for good!

If you find scorpions on your home and you need professional scorpion exterminators to drive them from the premises, schedule your Phoenix scorpion inspection today with Varsity Termite & Pest Control. With five star reviews on Google and Yelp, you can trust our exterminators to make sure your home is sealed and secure from existing and any future scorpion infestations. For more information, contact us today and schedule your Phoenix scorpion inspection!

Scorpion Entry Points and How to Seal Them

Scorpions are a fact of life in Arizona, but you don’t have to settle for having them in your home. You can protect your home from these pesky invaders so that you never again have to worry about putting your foot in a slipper and ...
Read More

The exact definition of a pest as shown in Wikipedia is that “it’s a plant or an animal detrimental to humans or humans concerns”, this includes organisms that cause nuisance and also epidemic diseases that are associated with high mortality, like plagues. In other words, ...
Read More

Scorpions are one of the most common insects that can be found in Arizona. They can be so small that they could access and infest any room or space in your home that is not sealed. Their biggest characteristic is the venomous stinger they have ...
Read More

Living in Arizona is great when the weather conditions are nice. We have beautifully comfortable winters, and monsoon season is fun for those of us who love the rain. But what about the pests that bother us on a daily basis and invade our homes ...
Read More

How dangerous are scorpion stings anyhow?

Please don’t tell me not to worry … have you seen an Arizona bark scorpion – or any scorpion for that matter? Um, no. We can’t brag enough about our Valley, how gorgeous our mountains are or how perfect our unfailing Arizona sunsets make a ...
Read More

If you live in Arizona, then you are sure to have seen a scorpion, and maybe even in your home. Since scorpions enjoy the warm weather in Mesa, Arizona you may have a few questions about the difference between male and female scorpions, and how ...
Read More

3 Areas Scorpions Are Hiding In Your Home

Areas Scorpions Invade Your Home Scorpions and humans often will find themselves living in the same quarters. It just so happens that many of the smaller ecosystems within the larger home environment are the perfect places for scorpions to hide. Damp areas, clutter, and unsealed windows or any ...
Read More

All About Scorpions and Their Evolution If you live in Arizona, chances are you have seen these creepy crawlers in the dry, dirty areas within the desert, maybe even in your home! These creatures are relatives to the spiders, and are even family to ticks ...
Read More 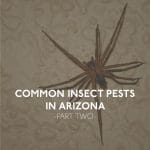 Here is a continued look into the most common insect pests in Gilbert, Arizona. You may have encountered these pests before but should you be worried? Let’s take a closer look at these insects and if they pose a danger to you or your home ...
Read More

In order to prevent scorpions from entering your home, scorpion control in Phoenix uses a dust pesticide to repel scorpions in the following areas of your house:

In addition to dusting pesticides, a good AZ scorpion control system will seal areas where scorpions can enter your home as well, such as:

It’s important to contact a Phoenix scorpion control company to deal with these pests. Although most species don’t present a life threatening danger (the Arizona bark scorpion being a notable exception), better safe than sorry is the name of the game. AZ scorpion control is necessary because it may be difficult to know which species you’re dealing with, and some people, such as the very young and the very old may be susceptible to infection from scorpion bites.

You should not attempt to remove or exterminate scorpions by yourself unless you know what you are dealing with and know beyond all doubt that you are not dealing with bark scorpions. These scorpions may live in colonies of up to 30, and they carry the most potent venom of any of the scorpion species found in the Southwestern United States. Bites from a bark scorpion are extremely painful. If bitten by a bark scorpion, seek medical attention. Contact a company specializing in scorpion control in Phoenix right away if you think you have even seen a bark scorpion.

At Varsity Termite and Pest Control, we are the experts when it comes to Phoenix scorpion control. For a free scorpion inspection and evaluation, contact us today at 602-757-8252.